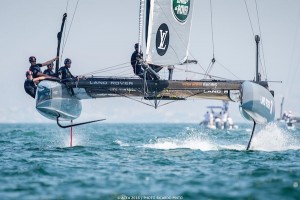 Oman is the oldest independent state in the Arab world and doesn’t immediately spring to mind when one mentions sailing.  However, Sir Ben Ainslie led his team to victory during the recent Americas Cup World Series.

It was ‘Super Sunday’ in Oman, a working day for the masses, and a critical day for the six crews in the America’s Cup World Series with three double points counting races in prospect. It was a particularly hard day for the British team – they were the ‘go for’ boat for the rest after their winning ways on Saturday. Sir Ben Ainslie had said that the start was all-important, but this somehow escaped his planning – Land Rover BAR played catch-up in all three races, sometime from last position. It was nail biting for the British supporters. Just where the team was able to make the gains was due entirely to the teamwork on board on a day when the choice of whether, and when, to use the Code Zero as an upwind sail was critical.

Ben was refreshingly honest about the two starts he made and broke the line. “We were going for the leeward end, which if you get it right, pays dividends. It is also risky because you can get rolled by a boat to windward if you are even a fraction late. Yes, it is high risk; we knew that.” Apparently there was also a shortage of transits to judge the exact position of the boat. “We’ll get better,” promised Ben…and they did!   It was a great day for the triumphant British team.

Oman has beautiful beaches, wonderful hotels with friendly and hospitable staff and fabulous sunshine.  If you would like to explore this truly beautiful country as part of a tour or if you simply crave a bit of R & R and a stunning beach, call Your Personal Travel Organiser today and I will be happy to arrange this for you.